“It has a special place in my heart – I love it here.”  These are the words Fed volunteer Roz Harris uses to describe her relationship with Heathlands Village.

And the feeling is clearly mutual after Roz was nominated for the Order of Mercy award, in recognition of 40 years dedicated voluntary service to Heathlands Village.

Recipients of the award, founded over 100 years ago by Royal Charter of Queen Victoria for ‘voluntary service assisting in the relief of sickness and suffering’, are nominated by charities on behalf of special individuals who have given a minimum of seven years of outstanding voluntary service.

Fed Chairman Mark Adlestone OBE DL, CEO Mark Cunningham and former CEO Karen Phillips MBE DL nominated Roz for the award, describing her as ‘an exceptional volunteer, who stands out in terms of her compassion and commitment.’

Receiving the award – one of only 27 awarded in 2018 – Roz said she was ‘thrilled and ecstatic. I am so proud to be a Jewish person connected to this organisation, and so proud to have been honoured with such an accolade.’

Roz’s journey with The Fed began in the 1970s, when she volunteered at Heathlands Village ‘to do whatever was needed – entertaining, singing, and holding parties for residents. I had always wanted to help older people so it was the obvious place to go.’

Eventually becoming Vice-Chair of the Welfare Committee in the 1990s, Roz – whose  husband Roy is also a Fed volunteer – was then asked by the late Dr Simon Jenkins, then President of Heathlands Village, to join the fledgling Quality Assurance Committee.

“I’ve been all the way up and down through the organisation,” says Roz, “and Heathlands Village is my second home – everyone here is my family, staff and residents. At a meeting of the Welfare Committee over twenty years ago, we were discussing what else we could do to make residents feel comfortable and at home – and someone suggested having a volunteer go round painting their nails; giving manicures; tidying their makeup – that sort of thing. I thought it sounded like a wonderful idea, and the rest is history.”

A much-loved and familiar face around The Fed, Roz can be seen almost daily offering a listening ear and a friendly chat to residents, whilst fixing their make-up and nails. One resident described Roz as ‘less a volunteer – more a friend.’

As well as serving on committees and befriending residents, Roz ran the Coffee Lounge at Heathlands Village every Sunday afternoon for many years.

She received the letter informing her of the award in April but did not even open it straight away!

“I saw this white envelope with markings I didn’t recognise and just popped it to one side. It wasn’t until later on, after I’d made a hot drink, that I opened it. I couldn’t believe it – I rang my husband and fell to pieces.”

Presented by Lord Lingfield, President of the Order, at Mansion House in July, the award was accompanied by a citation which stated that, “Mrs Harris is a model for all volunteers, working almost daily to enhance the lives of vulnerable people. She is loved by all who experience her gentle care.”

Apart from her volunteering duties, Roz has a personal connection to Heathlands Village.

“My father lived here for the last 16 years of his life,” she says, “and he simply loved the place. He was so happy here – and that’s the biggest tribute to the staff I can give. Heathlands Village now is an even more amazing place than it was then.

Thinking back over her many years of dedication, one event does stand out in Roz’s memory.

“At the opening of Eventhall House in 1996, I met the Duke of Edinburgh. That was a real thrill, and something I’ve never forgotten.

There are so many people and memories that I cherish from my time at Heathlands, but most of all it makes me proud to think how happy my mum and dad would be to see me receiving this medal from a place they were both so fond of.” 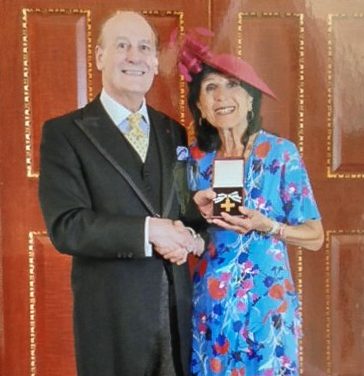 International Pop Star At The Fed